The Orfordness Lighthouse that stands today was built in 1792. The 30 metre tower was designed by architect William Wilkins (The father of the William Wilkins who designed the National Gallery in Trafalgar Square and also known for designing the Theatre Royal in Bury St Edmunds) contained a light that at one time had a range of 24 nautical miles.

The first lights in this area were a pair of wooden leading lights constructed in 1637. These were replaced in 1780 by a pair of brick towers. Scarcely a dozen years later the lower light of the two was precariously close to the sea due to shore erosion. It collapsed not long afterwards. In 1792, anticipating this inevitability, the landowner Lord Braybrooke built a new 'high light' in a different position. This is the lighthouse which still stands today. The old high light then functioned as the new 'low light', until it too was lost to erosion in 1887 (at some points of the tide, the foundations of this previous structure can still be seen from the top of the current lighthouse). The low light was not replaced again; instead, in 1888, red and green sectors were added to the high light. 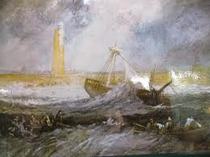 In 1914 a new revolving optic was installed (which remained in use for 99 years), and a new additional light was installed along with fixed lenses at a level below the lantern, so the sector lights now shone from windows on the tower. The lighthouse was electrified in 1959, and in 1964 it became the first lighthouse to be monitored by telemetry from Harwich, ushering in a process of lighthouse automation which continued around England over the next 35 years. The keepers were withdrawn from Orfordness the following year.

Find Out More about Life At the Lighthouse...
Video: Orfordness Lighthouse Engineers Prepare to Switch Off (BBC 13th Jan 2011)

The lighthouse was decommissioned on 27 June 2013, because of the encroaching sea. The modern electrical equipment and hazardous materials (mercury) have been removed. Trinity House increased the power of the light at Southwold Lighthouse to compensate for the closure of Orfordness lighthouse.