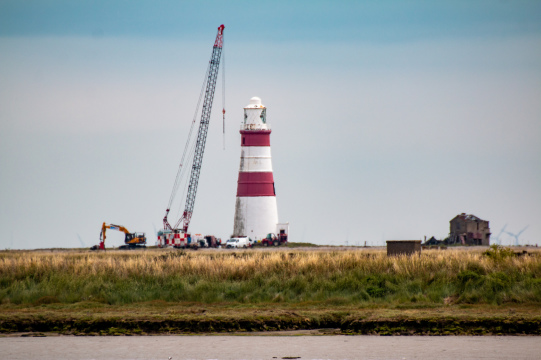 One of East Anglia’s most iconic landmarks, Orfordness Lighthouse, despite the valiant efforts of a local group of volunteers, is finally having to admit defeat and is in the process of being demolished.

The encroaching North Sea has brought the life of this Grade 2 Listed building to an end after 228 years of safeguarding and providing a navigation mark for mariners. Following a detailed assessment and a review of all the options, it was concluded that for safety reasons alone, there was no acceptable alternative other than demolition.

This section of the coast has always been hazardous. In 1627 32 ships were wrecked in a single storm.

Over the years there have been 11 different lighthouses on Orford Ness.  The earliest consisted of no more than wooden structures which burnt wood or coal. Apart from being vulnerable to pirates and the French (1707), many of these were washed away by the encroaching sea.    The existing lighthouse was built in 1792 by Lord Braybrooke of Audley End and was lit by oil lamps.

The project wasn’t entirely altruistic. Passing cargo ships had to pay a fee every time they passed and, in today’s money, the revenue earned was about £ ½ million p.a. The fees were subsequently reduced with the Government sharing the revenue, until in 1836 the lighthouse was compulsorily acquired by Trinity House.  They managed and improved the lighthouse until 2013.  Initially the light came from wood, coal and then sperm whale oil.   In 1959 the remaining light was converted and powered by electricity.

Until 1965 the lighthouse was manned by resident lighthouse keepers with their families living on site until 1938.  Subsequently the light was controlled remotely by Trinity House from Harwich until June 2013, when the lighthouse was decommissioned because of the encroaching sea. It was then sold to Orfordness Lighthouse Company Limited with a view to the public being allowed access during its final years.  This was achieved by setting up a registered charity, the Orfordness Lighthouse Trust.

Since 2013 many hundreds of visitors have had the opportunity to go up the lighthouse through the efforts of the Charity trustees and a core group of volunteers from Orford.

The demolition is being undertaken by Anglian Demolition from Attleborough, South of Norwich. This leading East Anglian firm has significant experience of dealing with projects of this magnitude.

The work involves saving as many of the historic artefacts as possible, including the original Braybrooke entrance plaque, items from the curved stairway, a magnificent wooden case to house the spare lamps and, most critically, the glazed lantern section at the top.

The works are likely to take a number of weeks and, quite apart from rescuing the key artefacts, will involve recycling most of the building’s components. In light of the sensitive and protected nature of the site, which is situated within a National Nature Reserve and an Area of Outstanding Natural Beauty, particular care is being taken to avoid any unnecessary environmental damage.

Owing to the Covid situation, the Ness is unfortunately closed to visitors as social distancing cannot be achieved on the ferry passage over.

Upon completion of the demolition exercise, the lantern room and other artefacts will pass to the Orfordness Lighthouse Trust charity and when funds are available it is hoped that they will form the basis of a lighthouse memorial structure on land which has been earmarked on the other side of the Ness facing the Orford town quay.

“It is obviously a sad day. But the sea now washes against the base of the building and the entrance porch has been undermined. The cellar walls are exposed. For a number of years it was possible to hold concerts for supporters above the beach overlooking the sea. No longer. This last winter a couple of adjacent buildings, including a beautiful Victorian oil store, were taken by the sea and in recent months the lighthouse has become a hazard.”

“We have been incredibly fortunate.  First, in the way that Trinity House allowed the lighthouse to be acquired and be looked after and visited by local people and others during its final years.   Secondly, in having a fantastic group of local volunteers to make it happen and, thirdly, when it came to the demolition, in having the National Trust and a host of other agencies who were both co-operative and understanding during this difficult time.”

“Regrettably, we had little choice as the owner had to remove the risk of imminent injury. However, by demolishing it carefully, rather than letting it tumble into the sea, it should be possible to recover the main artefacts and preserve them for future generations.

“Light houses are magnificent symbols of man’s strength against the elements.  The lighthouse has been a truly iconic landmark on the Orford and East Anglian skyline for generations. It would be a sadness to leave this stretch of the coastline naked for too long.

We have managed to secure a suitable site and all we need now is the funding for the building work.”

“Orford Ness Lighthouse has been an iconic landmark on this stretch of Suffolk’s coastline for centuries, and we are saddened to see it lost. Sitting on such a dynamic shingle spit, constantly changed by the sea, man’s presence here can often feel ephemeral. We are pleased to be working so closely with the Orford Ness Lighthouse team to ensure the building can be demolished safely and in a way that is appropriate to such a special place for wildlife and landscape.

The Aims of Orfordness Lighthouse Trust

Threatened by coastal erosion, this iconic building is at imminent risk of falling into the sea. Now in the hands of the Orfordness Lighthouse Trust, we are committed to keeping this much loved monument standing for as long as possible and to preserve its legacy after that. 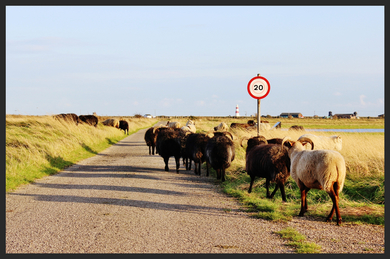 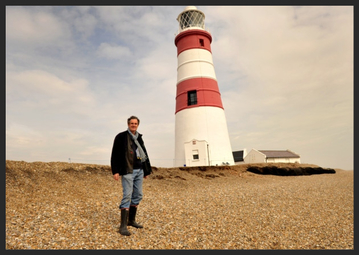 History of the Lighthouse

Find out more about the history of the Lighthouse and its place on our coast, including a small insight into Life at the Lighthouse for keepers and their familes. 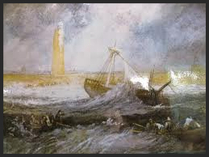 The Lighthouse has inspired many an artist... Submit your art work for our gallery...