About the Orfordness Lighthouse Trust

The Trust also aims to allow as many people as possible to visit the Lighthouse while it is still standing. Several thousands are already known to have done so since its doors were opened in 2013. The majority of these have local connections, but have previously not had the opportunity of visiting it.

Orfordness Lighthouse Trust relies on donations from the public to preserve the building's structure. It currently receives no funds from private or government grants. Significant sums have already been spent to defend the Lighthouse from the encroaching sea.

Trinity House had elected to decommission the Lighthouse due to the dangers of the encroaching sea and the terrible prospect of the mercury on which the lamp rotated, contaminating the sea when it collapsed. Conscious of concerns about its closure they gave detailed consideration to a range of options. Aside from the cost aspects, none of the options considered held out much hope of preserving the existing iconic Grade 2 structure for the long term. In addition, the Lighthouse was unmanned and Trinity House was not geared up to provide access for large numbers of visitors.

Trinity House had offered the Lighthouse to the National Trust for nothing; but the latter declined to take it on. The National Trust believed the final solution for the Lighthouse should be one of “controlled ruination” with visitors to the Ness limited to seeing the exterior only until the fateful day arrived. The Orfordness Lighthouse Company Limited was therefore formed to make the acquisition and to allow visitors greater access.

The mercury and the electrical elements of the lighthouse were removed by Trinity House on decommissioning. The optics were removed for safe keeping in November 2014. But with 10 metres of beach disappearing over the winter of 2013/14, action was required to prevent further damage where possible and to allow further time to remove key artefacts and to buy time to achieve, if possible, a longer term solution.

However due to Orford Ness being a site of Special Scientific Interest (SSSI) planning would only be allowed for Temporary defenecs. Over succesive years Orfordness Lighthouse Trust created "sausages" of beach shingle encased in a roll of strong geotextile material , which were placed at the top of the beach with the help of a team of local volunteers. As these sausages were massaged by successive tides, they sank deeper in the shingle, and new "sausages" placed on top, forming a soft wall of defence that defended the Lighthouse very effectively, extending her life well beyond the 4 months envisioned by some in 2013.

It is known that the Lighthouse cannot be defended where she is on a permanent basis. The time has now come to look to dismantle the building to preserve the artefacts. 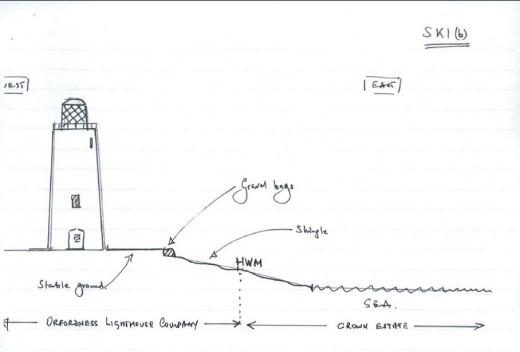